I walked around San Francisco collecting all the poisonous plants that grow in the city. On almost every block you can find a plant that will injure or kill you if consumed a certain way.

I did this because I want to prove that you shouldn’t be afraid of the natural world. That sounds like a contradiction - coming face-to-face with the world’s deadliest seems like it should demonstrate that nature is out to get us - but it doesn’t.

In fact, my journey down the rabbit-hole of poisonous plants proved how unlikely a normal person is to ever be killed by a plant. Nature’s deadliest poisons really aren’t that deadly; they’ll only kill you if administered in very specific ways. But even before that, most poisonous plants advertise their toxicity - STAY AWAY - and our bodies have evolved ways to detect the ones that don’t (that bitter taste is telling you to spit that out).

I did some research at the library and on Wikipedia and came up with a list of suspects - plants that contain oxalates, alkaloids and other scary-sounding toxins. These plants grow all over: in parks, gardens, backyards, elementary schools, and busy intersections. This article is a list of the plants I identified and the information you should know about each one.

South-West corner of Geary and Webster

The Solanum genus contains many edible plants like tomatoes, potatoes, and eggplants. But it also contains several poisonous species. The fruits of the American Black Nightshade contain the glycoalkaloids solanine and solamargine. Consumption can cause nausea, vomiting, cardiac dysrhythmia, paralysis, and death. Children have died from eating unripe berries, which are especially toxic. However, the mature berries are potentially edible, but I wouldn’t risk it. 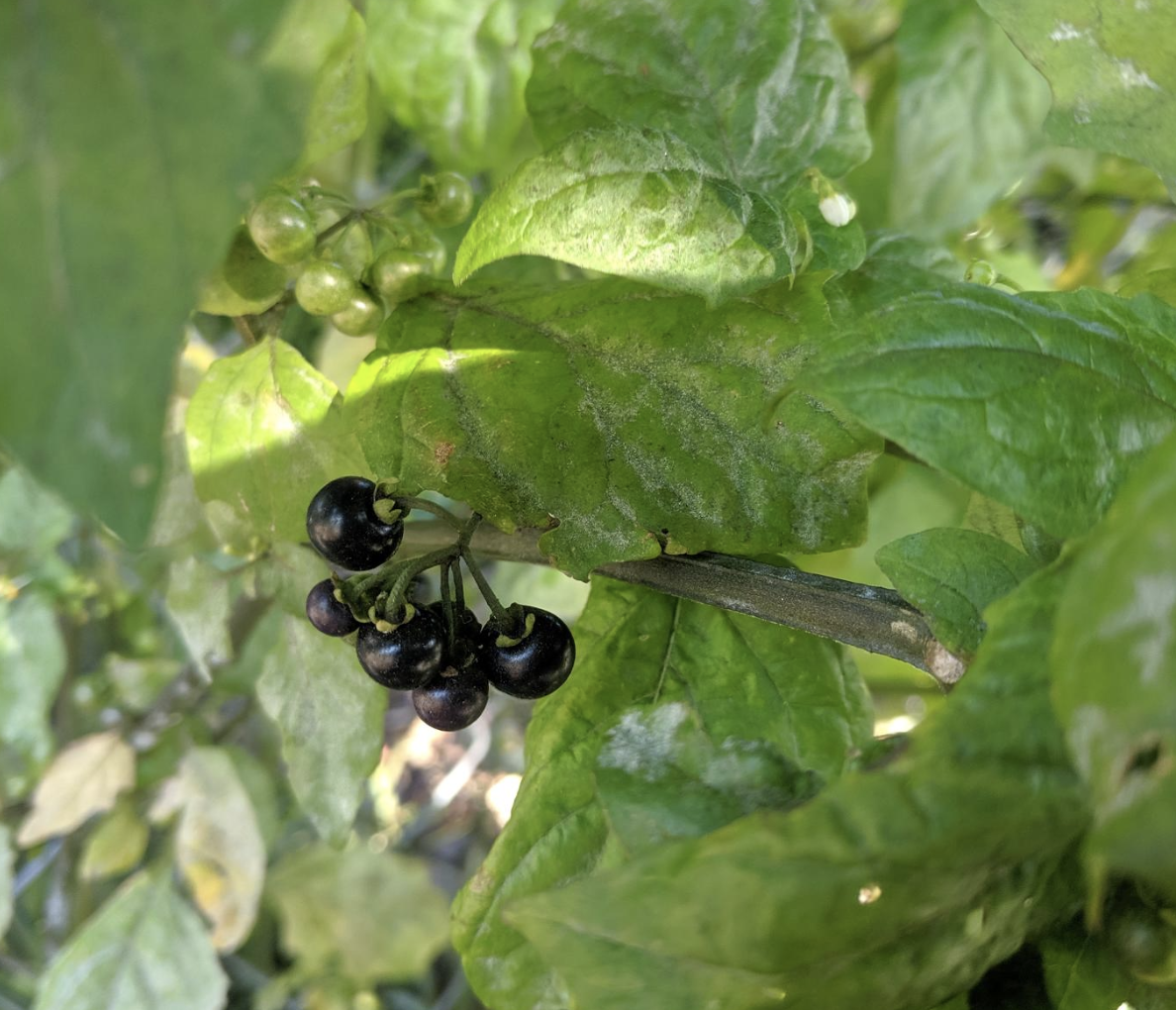 Early European colonists in the Americas avoided consuming tomatoes because of their association with the nightshade family: American Black Nightshade strongly resembles a tomato plant. Confusing the two can have disastrous results — in fact, there were tomatoes growing less than 10 meters from where I identified nightshade in Japantown.

This plant is especially sinister because of its appealing fruits and widespread distribution. Among all the plants on this list, American Black Nightshade is probably the most widespread and innocent-looking.

While I was walking from Haight-Ashbury to Golden Gate Park I came across a tall, withered plant with prominent floral corymbs that resemble those of a wild carrot and pinnated leaves that look like parsley. Because it looks similar to these two popular plants, it’s a more common form of poisoning. This plant is poison hemlock. 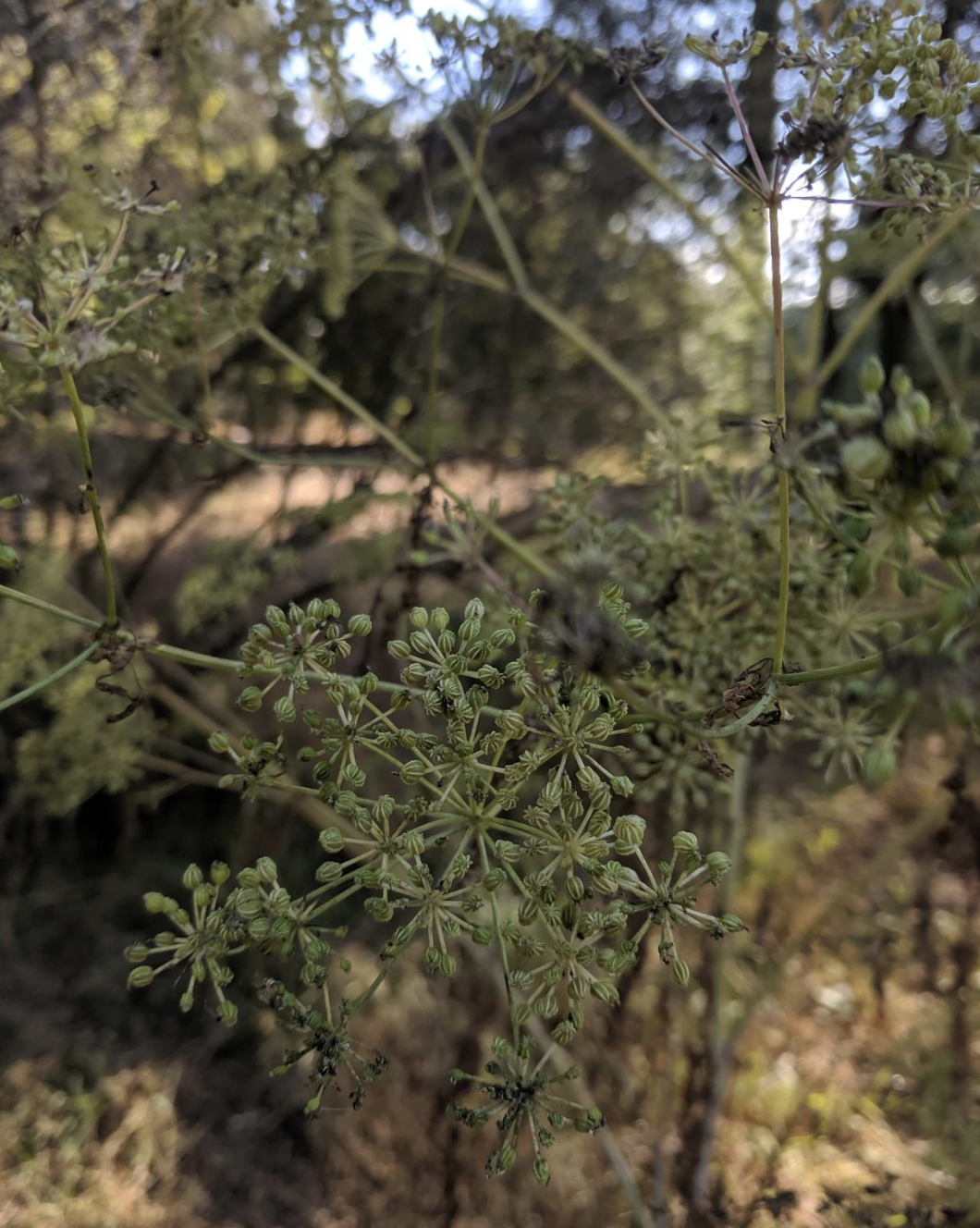 Poison hemlock native to the Mediterranean and traveled to the Americas along with European colonists. Hemlock contains high levels of the alkaloids coniine and coniceine. These alkaloids attack the central nervous system, suppressing the respiratory muscles and leading to vasoconstriction — especially in the lower body (more on that below) — and death.

A brew of hemlock is infamous for being the plant that killed the philosopher Socrates. His reaction to the poison was typical: The attendant examined Socrates’ feet and legs, then the man pinched his foot hard and asked if he felt it. Socrates said “No”. Then after that, the man pinched his thighs… passing upwards in this way he showed us that he was growing cold and rigid. And then again he touched Socrates and said that when it reached his heart, he would be gone. The chill had now reached the region about the groin, and uncovering his face the attendant saw that Socrates’ eyes were fixed - he was dead. (from Phaedo)

White snakeroot contains tremetol, which is named after the “trembles” caused by ingesting the poison. While it’s extremely uncommon to be poisoned by white snakeroot today, there was a time when milk sickness — caused by drinking milk produced by cows that had eaten snakeroot — killed thousands of American settlers in the Midwest. Nancy Lincoln — the mother of Abraham Lincoln — died of milk sickness.

Cows still consume snakeroot and still produce just as much poisonous milk as in the past. However, nowadays the milk from many cows is mixed together before being sold - diluting the effects of the poison. Be skeptical if you’re ever offered a glass of milk straight from the cow.

Although white snakeroot is not as dangerous as the previous two entries in this list, it deserves a place here because of the historical damage it caused. More people have likely died of snakeroot poisoning than all the other poisonous plants on this list combined.

The alluring trumpets of the brugmansia genus are found on the streets of every neighborhood in San Francisco. These are represented by aromatic species like brugmansia arborea, brugmansia insignis, and brugmansia aurea — although the latter seems to be the most common around here. 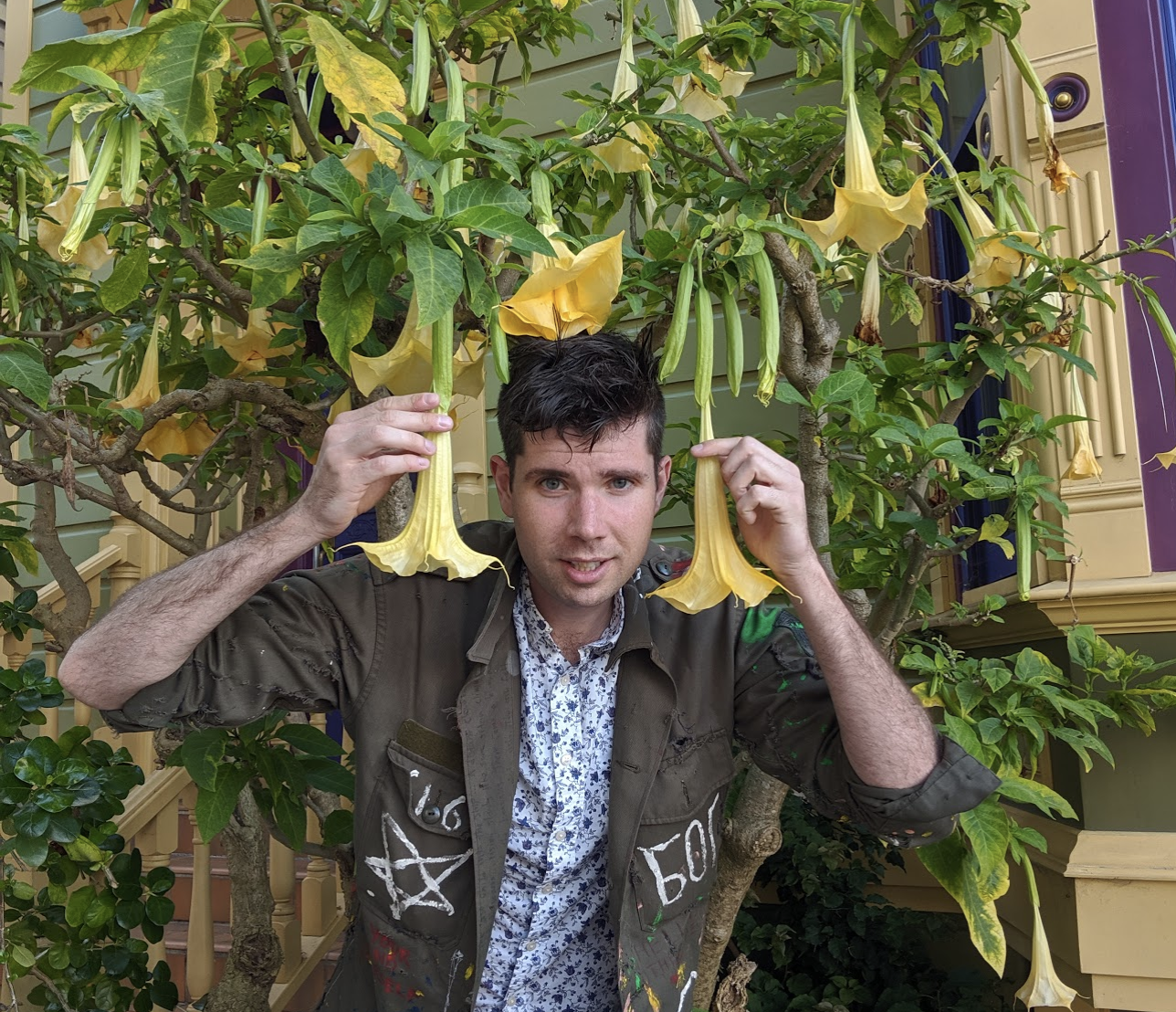 All parts of these plants contain high levels of the tropane alkaloids hyoscyamine and scopolamine. The former is the toxin that puts the deadly in Deadly Nightshade, and the latter, scopolamine, is a powerful deliriant.

Deliriants are a subcategory of hallucinogens that induce a state of delirium in the user. Consuming as little as one leaf or flower can cause confusion, tremors, cycloplegia, and auditory and visual hallucinations. Users have reported seriously injuring themselves, attacking other people, and wandering around naked for hours — all without any awareness of their behavior.

An Erowid user reported that after consuming Angel’s Trumpets he “went to the bathroom to look at himself in the mirror… The reflection was normal, except for one thing: its eyes were closed! When I moved, the reflection moved. And when I touched my eyes, they were closed too.” …creepy…

Deliriant psychedelics are common both in nature and in your medicine cabinet. Plants like Jimson Weed (which I’ve come across frequently in San Jose, and is often considered the worst drug in the world), henbane, and mandrake are all deliriants, along with over-the-counter drugs like Benadryl and prescription pills like Ambien.

The castor bean is the most sinister-looking of any plant on my list: it has large red palmate leaves with serrated edges and small clumps of seed pods covered in blood-red tentacles. It’s also the most poisonous: only a dozen of its small, grain-like seeds are enough to kill an adult. 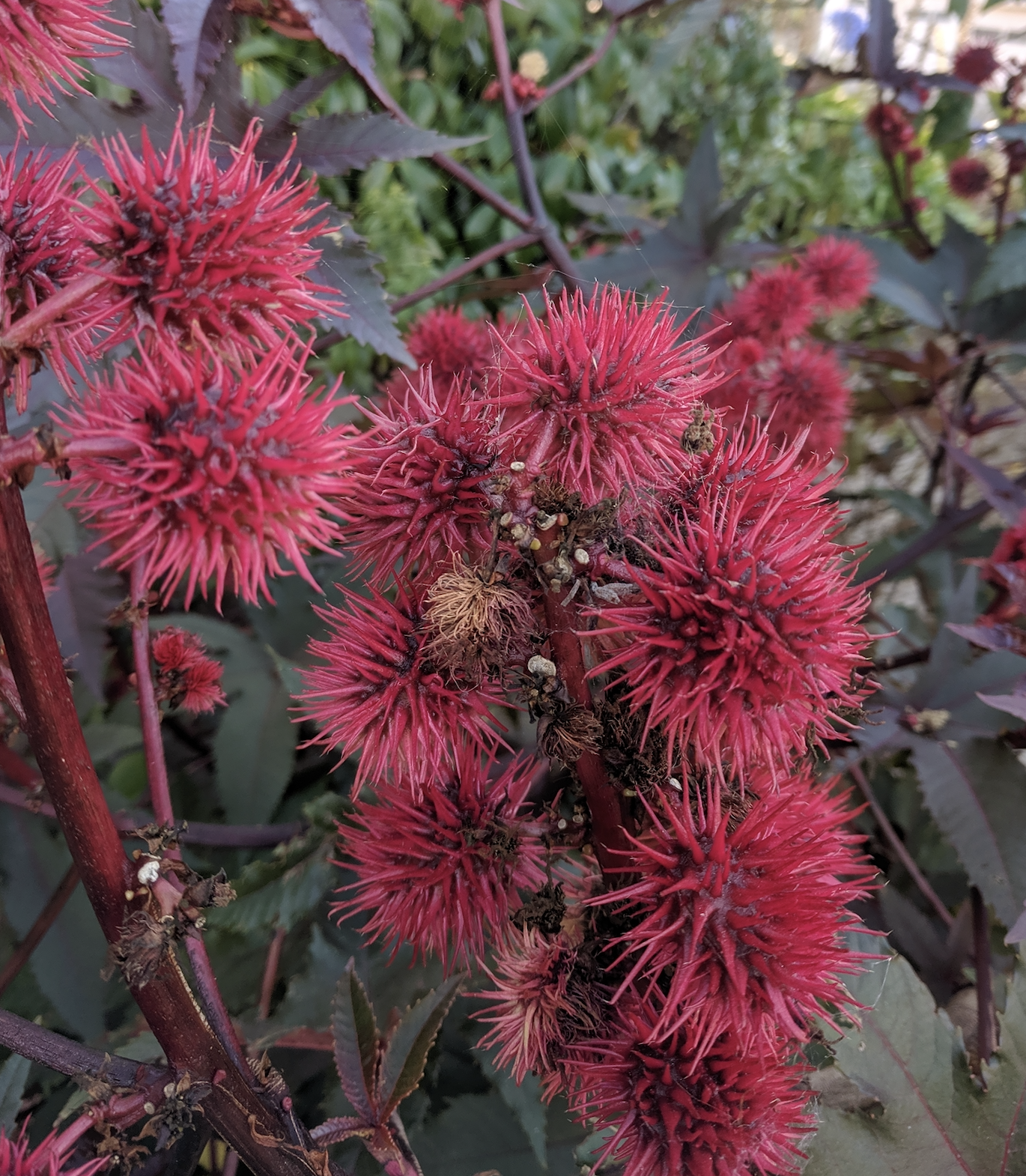 Castor beans are deadly because they contain ricin. Ricin can be sprayed as a toxic dust and was weaponized by the US military during World War II (though it was never actually used). Ricin has been used in several murders and murder attempts. The Bulgarian dissident Georgi Markov was stabbed with an umbrella tipped with a ricin pellet, and President Bush was mailed letters containing ricin residue.

Despite its lethality, castor beans are common as ornamental plants and are grown to produce castor oil, which you can safely rub all over your body in the form of castor oil soap. Because of its usefulness and interesting appearance, castor beans can be found in parks and gardens throughout SF.

I discovered American Pokeweed growing in the shade of a small tree on 20th Street. Pokeweed fruits look like shiny, purple blueberries organized into grape-like clumps. Among all the plants on the list, it looks the most appealing and edible. However, it’s highly toxic to humans and other mammals. Interestingly pokeweed isn’t poisonous to birds. This is because birds are the plants preferred seed-dispersers, as they range over larger areas than ground animals. Unlike other entries on this list, pokeweed has the unfortunate characteristic of tasting good. 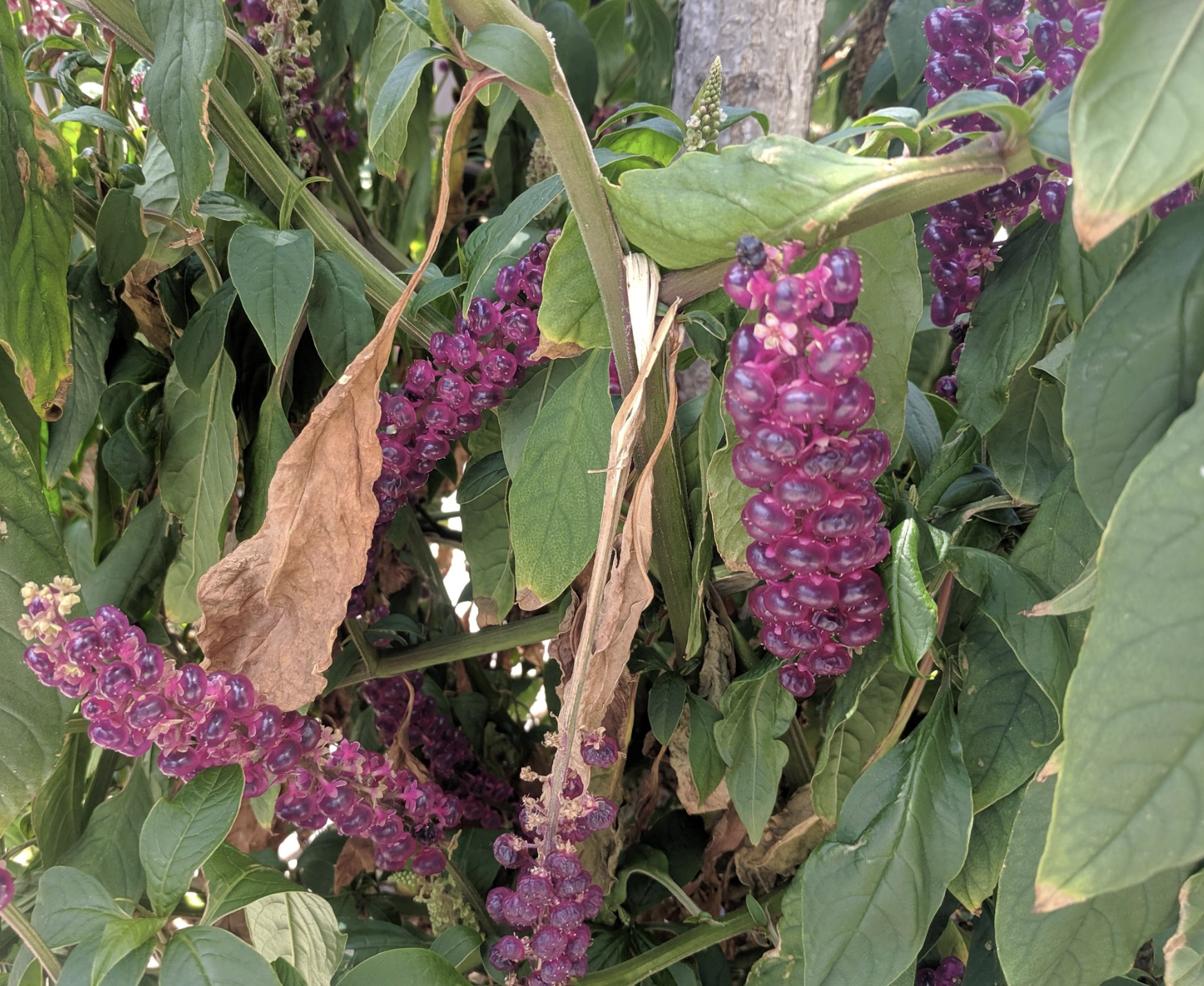 All parts of the pokeweed plant are poisonous, containing phytolaccatoxin and phytolaccigenin. The juice of the berries can be absorbed through the skin. Some people have mistakenly thought that pokeweed berries are safe to eat after observing birds eating them, only to experience its powerful emetic and purgative effects. In high enough doses, pokeweed poisoning also causes convulsions and paralysis of the respiratory muscles, which can lead to death.

The Convolvulaceae family (also called the Morning Glory family) contains over a thousand species of plants, including the sweet potato and hundreds of species of morning glory vines. Field Bindweed contains the alkaloid pseudotropine and can be dangerous for grazing animals, but human poisonings are not documented. 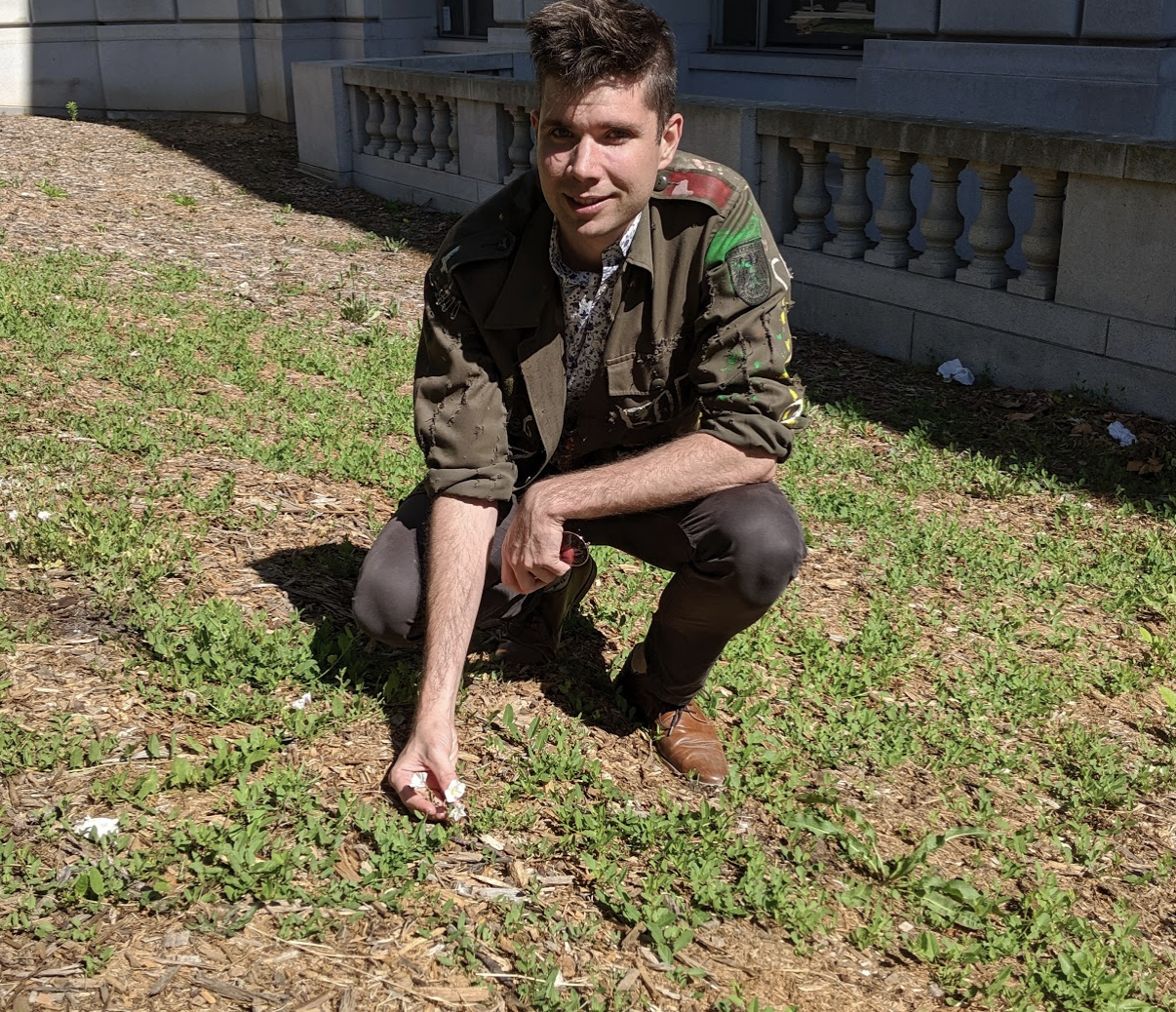 Morning glory species can be found on almost every block in San Francisco. An especially interesting species (which I was not able to identify) is the Mexican Morning Glory (Ipomoea tricolor); this plant contains the alkaloid ergine (LSA) which has similar effects to the psychedelic LSD, although it has additional symptoms associated with alkaloid poisoning like nausea and vomiting.

Yew is an evergreen tree native to Europe that can be found in parks and gardens across the United States. The entire plant is poisonous, contaning taxine alkaloids which are cardiotoxic. However, the only part of the plant that isn’t poisonous are the small red arils that surround its seeds. These cup-shaped fleshy fruits can be parted from the seeds and eaten - they have a mild piney taste that I enjoyed. However, be warned: the seed itself is extremely toxic, and if swallowed can kill you. However, human poisonings are quite rare, though animal poisonings are more common. 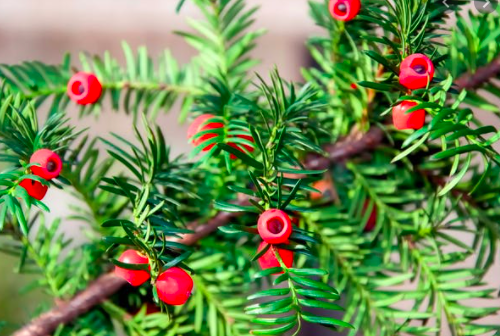 I found a yew tree in Golden Gate Park and carefully ate some of the arils. This was definitely the closest I’d come to poisoning myself, though unless you’re extremely careless it would be very hard to accidentally consume the seed portion of the fruit.

But the most deadly plant in the world is by far the most familiar: a genus of nightshades — called Nicotiana — are the source of tobacco, which kills almost half a million Americans each year.

Most of the plants living in the city aren’t toxic - and those that are do a good job of warning us to stay away. In my exploration of the city’s plants, I learned that there’s not much to fear in the plant kingdom, and I’m much less apprehensive about putting a wild plant in my mouth.